Investing in the Invisible 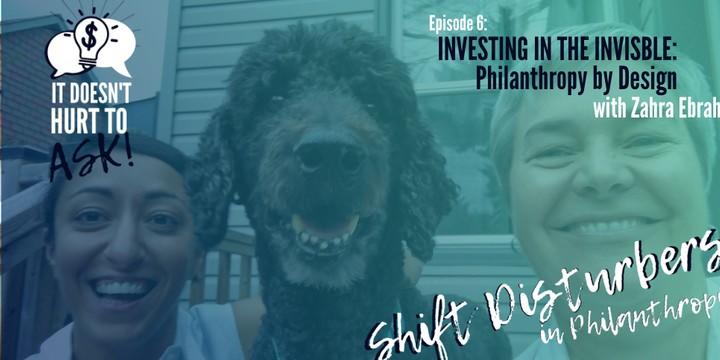 Episode 6 Transcript | Investing in the Invisible

Cathy Mann: Welcome to, It Doesn't Hurt to Ask! The podcast where we talk about fundraising. This season we'll be talking to shift disturbers in philanthropy, people who are shaking up traditional philanthropy practices. In today's episode, we're talking to Zahra Ebrahim. She's a human centred designer and urbanist. She was also recently recognized as an emerging leader in Canada's top 100 most powerful women by the women's executive network.

Welcome, Zahra, to It Doesn't Hurt to Ask!.

Cathy Mann: All right, this is going to be fun. So here's my first question is what the heck do you do?

Zahra Ebrahim: MMM, yeah. Really good question. I feel like that's the most common question I get asked and I'm on good days, I'm uplifted by it and on bad days I'm saddened by it. And today's a good day. I'm trained as a designer. I studied architecture and design and what I use design for now is to design opportunities for more people to share power with others is what, how I describe in my mind to myself. What did I do? Okay. So the design process is known for being really user centered, so focused on people, starting with people, not starting with an idea and a baked idea. Using that as a prompt to be iterative and to think about, you know, ways in which we can prove it with improvement with the voices of more people.

Zahra Ebrahim: And the idea that it's not when you're creating something, you shouldn't just be designing for the moment that someone needs it, but you should be designing for their entire life. So where does this moment fit into their entire life? So the process of design is really nicely, lends itself to participation. And so what I do right now, my current title is I'm the Executive Adviser to Deloitte on anything that has to do with advancing the public interest. So that can be working with public sector organizations who are working on the service delivery for major social programs.

Zahra Ebrahim: It can be, uh, working with private sector organizations who are trying to more meaningfully engage people in the design of, you know, a checking account.

Zahra Ebrahim: They can also be working with charities and philanthropic organizations and helping make sure that they're achieving the impact by actually engaging the people there, most trying to serve in the design of their charitable programming or in the design of their philanthropic programming. So my job really is to create processes on one side, but on the other side of it, I think someone recently said to me, and it was like the greatest compliment, they were like, you're like the Josh Lyman of social change, which will mean nothing to a lot of people. To me it means a lot because it's a reference from the West Wing. And Josh Lyman was the deputy chief of staff in the West Wing, carried his backpack with the only one strap around the White House. Like a boss. Yeah. Um, and was essentially the congressional whip that when an important movement needed to happen, scurried around and leverage all of his relationships to get the right people in the room. Having a really sane conversation. And now that I sort of notice the requests that come my way very often it's about like can you get the right people together in a room and then create a space so that they don't just talk about what they want to talk about it. They talk about the thing, our shared agenda. So yeah, that's what I do.

Cathy Mann: Cool. And so I first met when you were working with East Scarborough Storefront on a project called Community Design Initiative. To what degree does the work that you did in the charitable sector and, and you continue to do with charitable clients influence work that you're doing in the private and public sector?